Why Do Hearts Break?

“…not till we are completely lost, or turned round – for a man needs only to be turned round once with his eyes shut in this world to be lost – do we appreciate the vastness and strangeness of nature. Every man has to learn the points of compass again as often as be awakes, whether from sleep or any abstraction. Not till we are lost, in other words not till we have lost the world, do we begin to find ourselves, and realize where we are and the infinite extent of our relations.” – Henry David Thoreau, Walden

Starting With The End

There are some things, like heartache, that I can never find the words to describe. Instead, my body is frantic to explain it to me with a crescendo of pounding heartbeats out of my control that causes my head to spin and interferes with my breathing, probing to see if I really want to heal as desperately as I want to live. There is a nagging, uncomfortable urge to physically purge as if spewing out my insides will cleanse me of despair and grief. Exhaustion begs to give way to sleep but is only met with nightmares.

I didn’t recognize myself – who was this stranger pleading, yelling, and wailing? I was disgusted with this insecure and fearful foreigner who looked exactly like me, rationalizing, blaming, and shaming first him, then me, all the while filled with regret and self-hatred. And then the lump started forming in her throat as she realized that the effort was in vain and that she couldn’t change his mind. In the aftermath of the disaster, she was in fetal position in the rubble, head turned upward to observe the warmth of security dissipating like the last tendril of smoke from a fire put out long ago, a portent of solitude.

Breakdown for a Breakout

I’m all too familiar with experiencing a breakdown, whether it’s from leaving home, going through a breakup, or facing an “incurable” skin disease; the list could go on and on. The School of Life describes the crisis as “an attempt to jumpstart a process of getting well…through a stage of falling very ill.” In that same line of thinking, Rainer Maria Rilke talks about how “…sickness is the means by which an organism frees itself from what is alien; so one must simply help it to be sick, to have its whole sickness and to break out with it, since that is the way it gets better.“

Didn’t I want this?

Wasn’t I curious about the concept of peace coming from within instead of without? How could I reject the opportunity to use profound sadness and hardship to transform through this trial by fire, to learn by doing and really sponge it up this time, to change the set point of my humility and faith in life?

On a recent hike up the Grouse Grind, a sign at the 1/4 mark stood out to me: “This is the best place to turn around. Beyond this point, downhill travel is not allowed.” With that in mind, for the first time in my career of great loves and losses, I reached out – way far out to a large and deep social support system that I didn’t know existed. Not only did they help me get as far away as possible from the emotional cataclysm so that turning back was no longer an option, but they also created an invisible protective barrier so that I may have a safe space for the vulnerability needed for courage. And I mean “courage” at its origin, deriving from the Latin cor (heart) and, as I interpret it, extending to the concept of the inner strength needed to lay bare one’s heart or be true to oneself.

“Unless you can allow yourself to take the risk, to be open, to live as a wholehearted person, when you can do that, you recognize that you’re really just like everybody else. And that gives you the confidence to be yourself, which is all you really need in life – to be more of yourself.” – Oprah in an interview with Brené Brown

As much as I value human connection, I couldn’t reconcile how personal growth and understanding could have much to do with others if it was so personal. Add to that the fear of depending on others, getting hurt again, and being criticized amid a culture of perfectionism and achievement masked by I-can-do-it-on-my-own rhetoric.

The Paradox of Solitude and Community

In Machu Picchu, there is a sacred rock in the shape of a real-life mountain behind it called yanantin, the Andean symbol of “complementary opposites” like the delicate duality of yin and yang in Chinese philosophy. Dr. Hillary S. Webb in “Yanantin and Masintin in the Andean World” wrote this of yanantin: “There is an acknowledgement that Self and Other are never and can never be separated, for each depends on the other for mutual recognition and reciprocity.” As I leaned into the body of the Other towards the 1/4 mark, the Other became my eyes for what I couldn’t see. 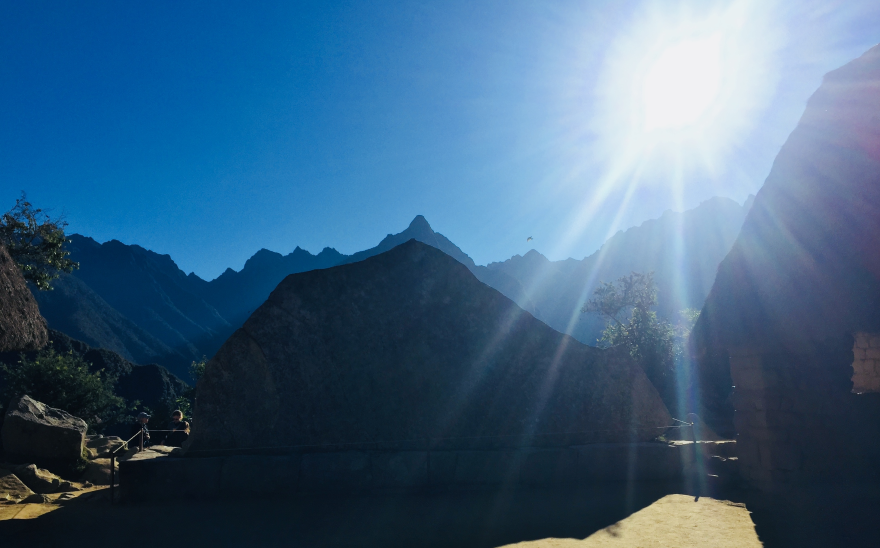 Maybe it’s the same as Nietzsche’s theory that enduring pain and difficulty is necessary to treasure joy and experience fulfilment. Maybe it’s like how Troy Turi said that we start with the ego to get past the ego in his Bhagavad Gita workshop I attended at One Yoga. All I know is that I need solitude to be thoroughly moved by and more powerfully connected to community, and I need community to find meaning in and leverage my existential solitude.

This Is for Us

So, this is for me to soothe the suffering through art, that I may commemorate this elegant interplay between brokenness and resilience.

This is for him as absolution because there can be purpose in heartbreak and desolation, that I may continually forgive for all the times I’ve been forgiven.

This is for my family, his family, my friends, boss, coworkers, counsellor, and even acquaintances who shine a light on my privilege with their kindness, that I may somehow communicate the immensity of my gratitude.

This is for every stranger who renewed my faith in humanity and therefore in myself, that I may be able to pass it all on:

And, this is for you as a witness that I risked wearing my broken heart on my sleeve if it meant life could be enriched, that our world may be bigger as it expands with possibility and at the same time smaller as we connect with each other more meaningfully.