A Snapshot of Quarantine & Social Isolation in Peru

The night of April 7th that we gazed at the supermoon in Huancayo, Peru, the peak of the moon’s fullness this year, coincided with the Peruvian president’s announcement that we may also be nearing the peak of Peru’s COVID-19 curve (which was not actually the case). It was a day and night like all the others since the beginning of this nationwide quarantine, filled with the sirens of ambulances and police vehicles accompanied by a chorus of dogs incessantly barking – a potential anthem of a loneliness and restless cabin fever epidemic arising amidst the current coronavirus pandemic. It’s a byproduct of the “obligatory social isolation” first mandated by Martín Vizcarra, the president of Peru, in mid-March and enforced with increasingly strict measures to control COVID-19 cases in the country. The irony is that we isolate to keep from getting sick with the highly contagious coronavirus of our day, yet loneliness is also contagious and social isolation is itself an epidemic that may affect health, cognition, well-being, and longevity.

In contrast to “social distancing” or “physical distancing” coined and recommended by public health experts in Anglo-America, Latin American governments and media have opted for using the words cuarentena (quarantine) and aislamiento (isolation). What does this look like in Peru?

A Snapshot of Loneliness & Anti-Loneliness in Japan

“When so many are lonely as seem to be lonely, it would be inexcusably selfish to be lonely alone.” – Tennessee Williams

Flashback to the good ol’ pre-COVID-19 days when my brother and I took a month-long trip to Tokyo, Japan that had me reflecting on solitude. As the world grows and urbanizes, we’re surrounded by more people, which paradoxically can lead to more feelings of social isolation – consider the university student surrounded by young adults on the first day at campus or walking across the famous Shibuya Scramble Crossing amidst thousands of people on their cell phones. It’s likely no coincidence that Tokyo, the most populous city in the world, has an “anti-loneliness” cafe where the solution to loneliness is a human-sized stuffed animal resembling a hippo whose name is Moomin. Based on a series of Finnish children’s books, the themed Moomin Bakery & Cafe in Tokyo Dome City offers the complete Moomin experience as you enter the Moominhouse, meet Moomin for a date, nibble Moomin-shaped pastries, and sip Moomin latte art. 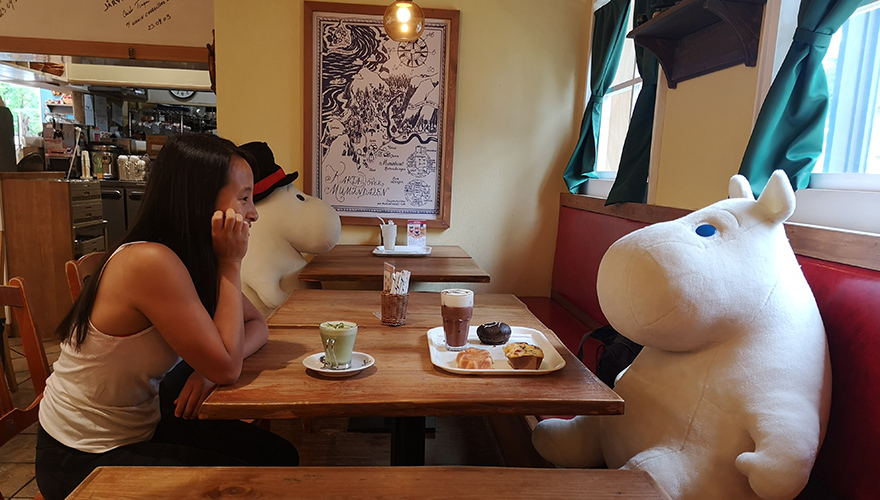 And no conversation of social isolation would be complete without mentioning the hikikomori phenomena. Originally characterized in Japan in the 90s, and now recognized worldwide, hikikomori refers to “withdrawal” from society for an extended period of time. These modern-day recluses isolate themselves to create a barrier between them, and trauma and/or societal pressure in any form. Often medicalized as a mental illness requiring rehabilitation or treatment, hikikomori has been referred to as a “silent epidemic” drawing haunting parallels with the “loneliness epidemic“ – the labels carry shame and stigma, the sufferers may feel misunderstood, undervalued, and looked down on, but should they feel this way?

The Many Faces of the Moon & Isolation

Though the negative effects of isolation may be very real here in Peru, the concept of forced isolation doesn’t seem to carry the same undertones of distress, depression, and punishment. Yes, maybe awareness-raising is warranted considering that Peruvians living alone is a relatively new phenomenon – the latest census showed a surprising 74% increase in one-person households over a decade, bringing the total to ~17% of all homes in the country (compare that to ~28% of homes in Canada, making one-person households the most common of all household types for the first time ever). And yet, maybe the hum of collectivism and an expanded definition of connection can be protective of the aloneness of isolation.

“Those who dwell…among the beauties and mysteries of the earth are never alone or weary of life.” – Rachel Carson, The Sense of Wonder

What that glimmer means can be explained by the light of our April supermoon, a fitting example of the wide variety of interpretations a single object, symbol, or word can hold:

“…there is a soft moonlight that can give us the peace that passes understanding. There is a moonlight that inspires a kind of awe. There is a cold and austere moonlight that tells the soul of its loneliness and desperate isolation, its insignificance or its uncleanness. There is an amorous moonlight prompting to love – to love not only for an individual but sometimes even for the whole universe.” – Aldous Huxley, Meditation on the Moon

Likewise, quarantine and isolation are not inextricably tangled with loneliness. In fact, none of those terms are inherently negative. Quarantine can set the stage for new discoveries as it did for Newton during the Great Plague. Isolation can be a breeding ground for philosophical thought, insights, and self-learning as it did for Thoreau in “Walden.” Even loneliness, when present, can be seen as a natural nudge toward connection (Cacioppo et al.) or “…the way by which destiny endeavors to lead man to himself” (Herman Hesse). In this way, the COVID-19 pandemic can help instigate and bring light to an exploration of how we feel about aloneness and connection.

The Many Faces of Connection

“Our force for counteracting chaos is connection.” – Jon Mooallem (in admiration of how broadcaster Genie Chance allayed fears in the aftermath of the Great Alaskan earthquake by connecting the community through radio)

Bringing special awareness to or seeing past the potential discomfort of social isolation during the global chaos of the COVID-19 pandemic could be an opportunity to move along the isolation spectrum from stressful seclusion to peaceful solitude as well as the associated connection spectrum from me-versus-them to all-of-us. It’s the difference between the angry tone of #StayTheFuckHome and the solidarity of thousands of #YoMeQuedoEnCasa (I Stay Home; also the name of Peru’s emergency subsidy campaign). It’s the police officer I witnessed bending down to put a mask on an elderly lady to a girl I spied from my apartment window leaving kibble for street dogs. It’s the authorities in the streets playing patriotic songs like Contigo, Peru (With You, Peru; see video below) on loudspeaker to famous musicians singing about the pandemic and the nightly 7pm or 8pm applause for hospital workers around the world.

For me, the uniting manner of connection that accompanies the peacefulness of being at home for an extended period of time is one that is:

What do isolation and connection mean for you during this coronavirus pandemic?