Feeling at Home in Dusty Davao City: Parallels to Living in Peru 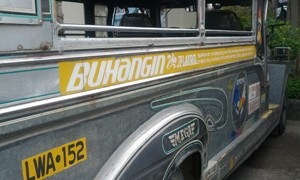 It’s been 6 years, maybe 7, since I’ve been to the Philippines. The last time I arrived in Davao City, we used a staircase to exit the aircraft, suffocating in the dust and heat as we walked ourselves to the terminal, which was really just a simple box-like building. I would never have guessed that this time, I would walk into a renovated airport through the jet bridge that I’m used to and into maze-like hallways pristine in white that I associate with larger airports to ease our transition to a new world.

When my dad saw what it was like for me living in Peru, he told me that Huancayo looks a lot like Davao City when it was still a town 30 years ago. Instead of movie theaters, they both had their cabinas where we’d sit on beach chairs and watch a pirated movie in a private room. Their marketplaces are a bustling community and the general population doesn’t have Internet in their own homes, so Internet cafes are widespread.

When I first arrived in Huancayo in 2008, the first supermarket had just opened, overshadowing all the little mom-and-pop shops. And within months, Huancayo would inaugurate Real Plaza, its first mall with its first movie theater. It became how I remembered Davao City as a child on various summer vacations where everything happened at Victoria Plaza, the only mall in town. People pack themselves into jeepneys (combis in Peru) to get around town or leave the city where you’ll find yourself surrounded by farms (durian and pomelo by Davao City, artichoke and potato by Huancayo). And then just a bit further is the vastness of seemingly untouched land.

I find that the two cities continue to parallel in dustiness, the garbage on the streets, the near nonexistence of traffic rules, the Catholicism interwoven in everyday life, the slower pace of life, the warmth of the people, and the sincerity of smiles.

Nevertheless, it’s amazing to see how much Davao City has grown and changed with 5 major malls and highways replacing dirt roads, and to imagine how Huancayo may follow a similar path toward development for better or worse.

How has your city changed in the last 5 years?